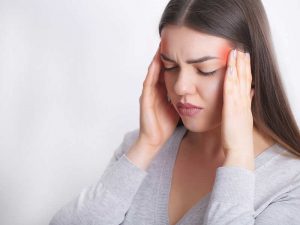 Migraine is a complex disorder characterized by recurrent episodes of headache, most often unilateral and in some cases associated with visual or sensory symptoms—collectively known as an aura—that arise most often before the head pain but that may occur during or afterward (see the image below). Migraine is most common in women and has a strong genetic component.

Up to 20% of people in the United States will experience migraine headaches at some point in life. In about half of those, migraine headaches first appear during childhood or adolescence. Two-thirds of people who get migraines are women, probably because of the influence of hormones. Migraines also tend to run in families.

A migraine usually is a throbbing headache that occurs on one or both sides of the head. The headache typically is accompanied by nausea, vomiting or loss of appetite. Activity, bright light or loud noises can make the headache worse, so someone having a migraine often seeks out a cool, dark, quiet place. Most migraines last from 4 to 12 hours, although they can be shorter or much longer. One unique feature of migraines is an unusual sensation that a migraine is about to occur. This sensation is called a prodrome. Prodrome symptoms can include fatigue, hunger and nervousness. Migraines also have typical aftereffects, such as a feeling of exhaustion that lasts a day or two after a severe migraine headache has faded. Not all people who get migraines have prodromes or aftereffects.